One early spring morning I made a very last minute decision to get on the bike and go camping. It would be my first time bike camping since moving to England in the Fall. Within about an hour of waking, I was packed up and heading for the Bath Spa train station. I rode the train to Taunton and where I filled up on groceries before heading for the Quantocks hills.

For the beginning of my journey I loosely followed the Quantocks/Exmoor route from bikepacking.com. The beginning of the route winded around lush country lanes and up a steep, rugged bridleway that led to a high opening. I was greeted by a group of Quantocks Ponies who were feasting on the dewy grass. I dropped down a trail on the backside of the hill and into an overgrown wood. 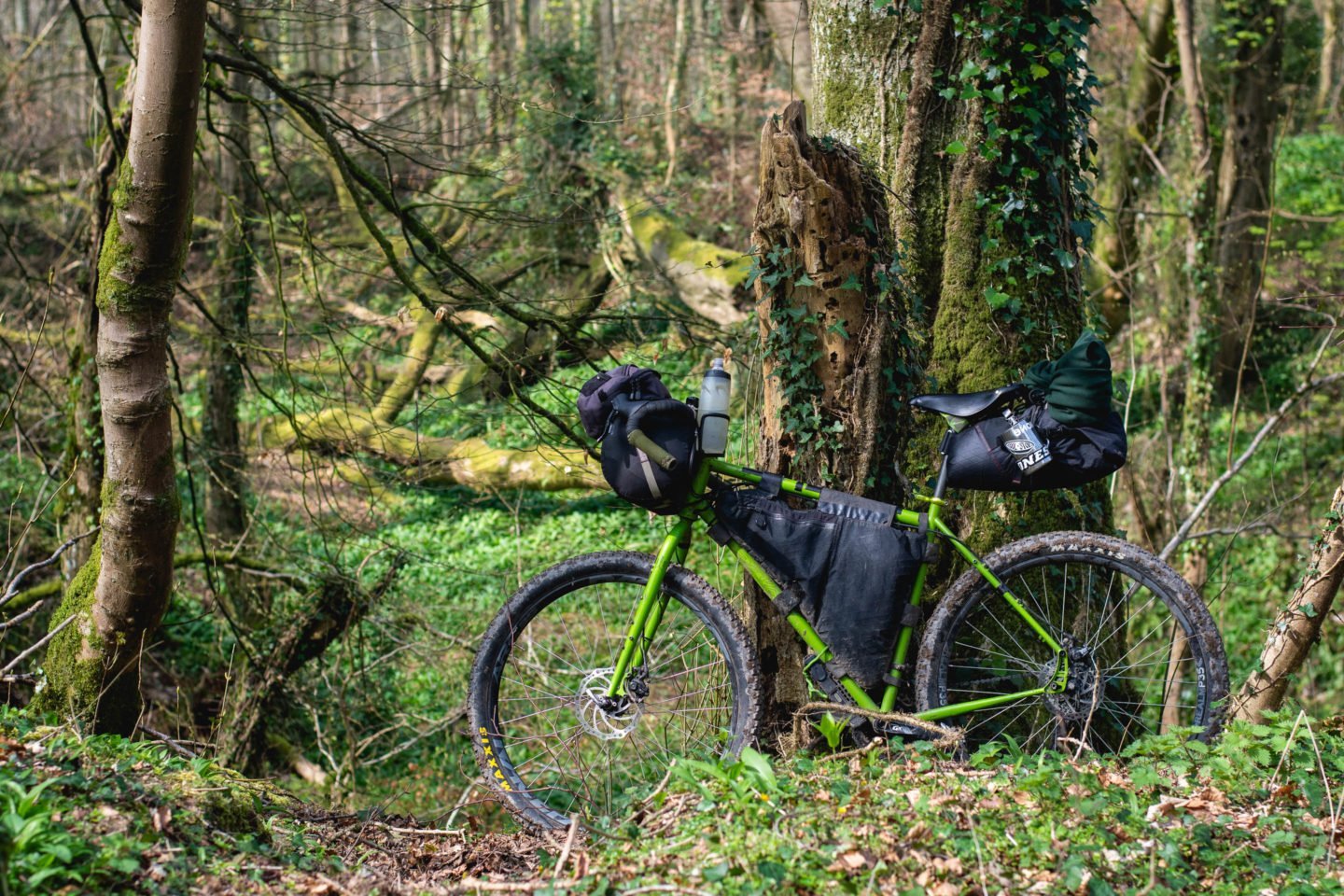 After making my way halfway up the park I came across some mountain bike trails and couldn’t help myself from going for a rip. I ran into some local riders who took one look at my rig and suggested the easy trail down but I must have screwed up their directions because I ended up on a real steep trench of a trail. It was sketchy but fun of course. 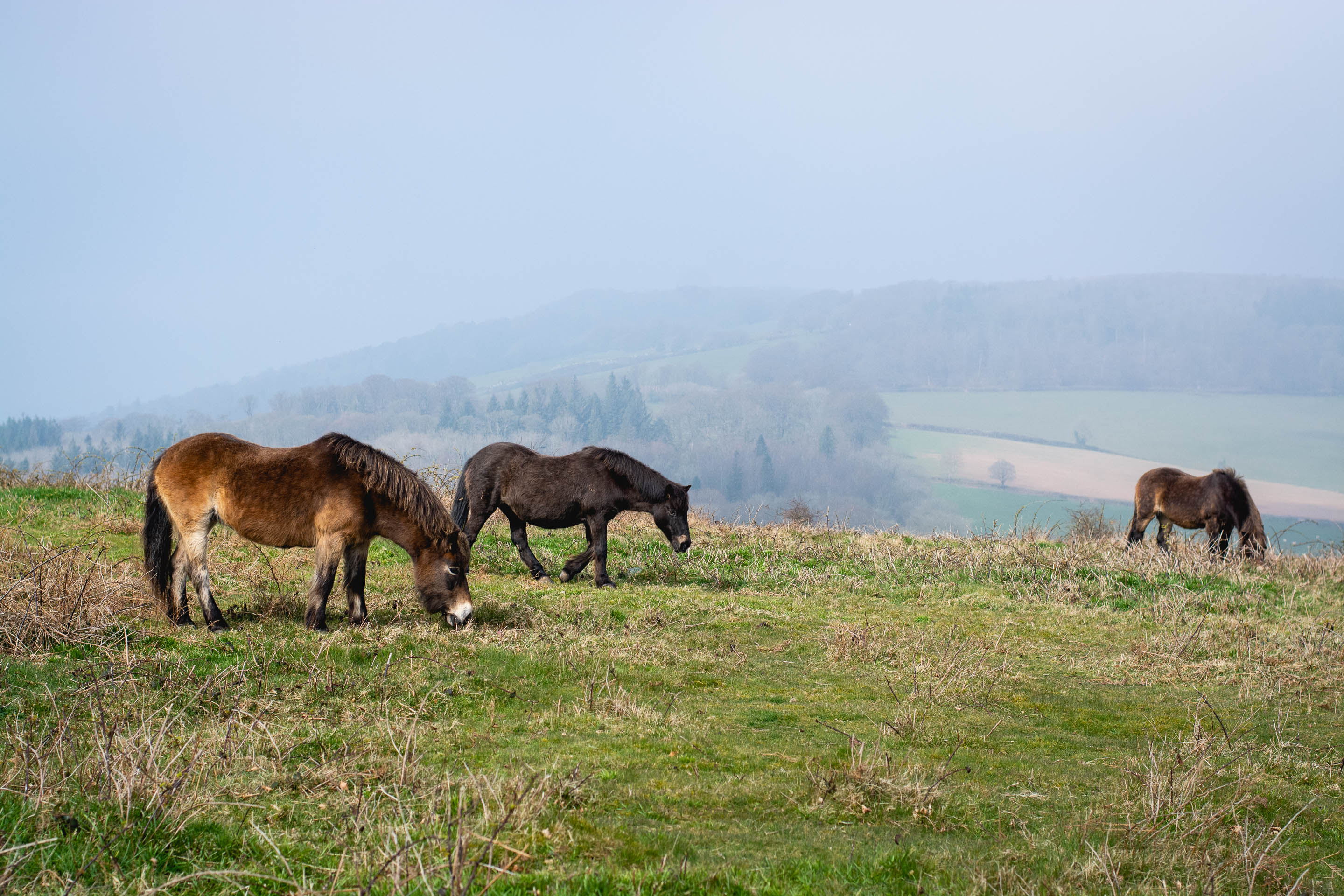 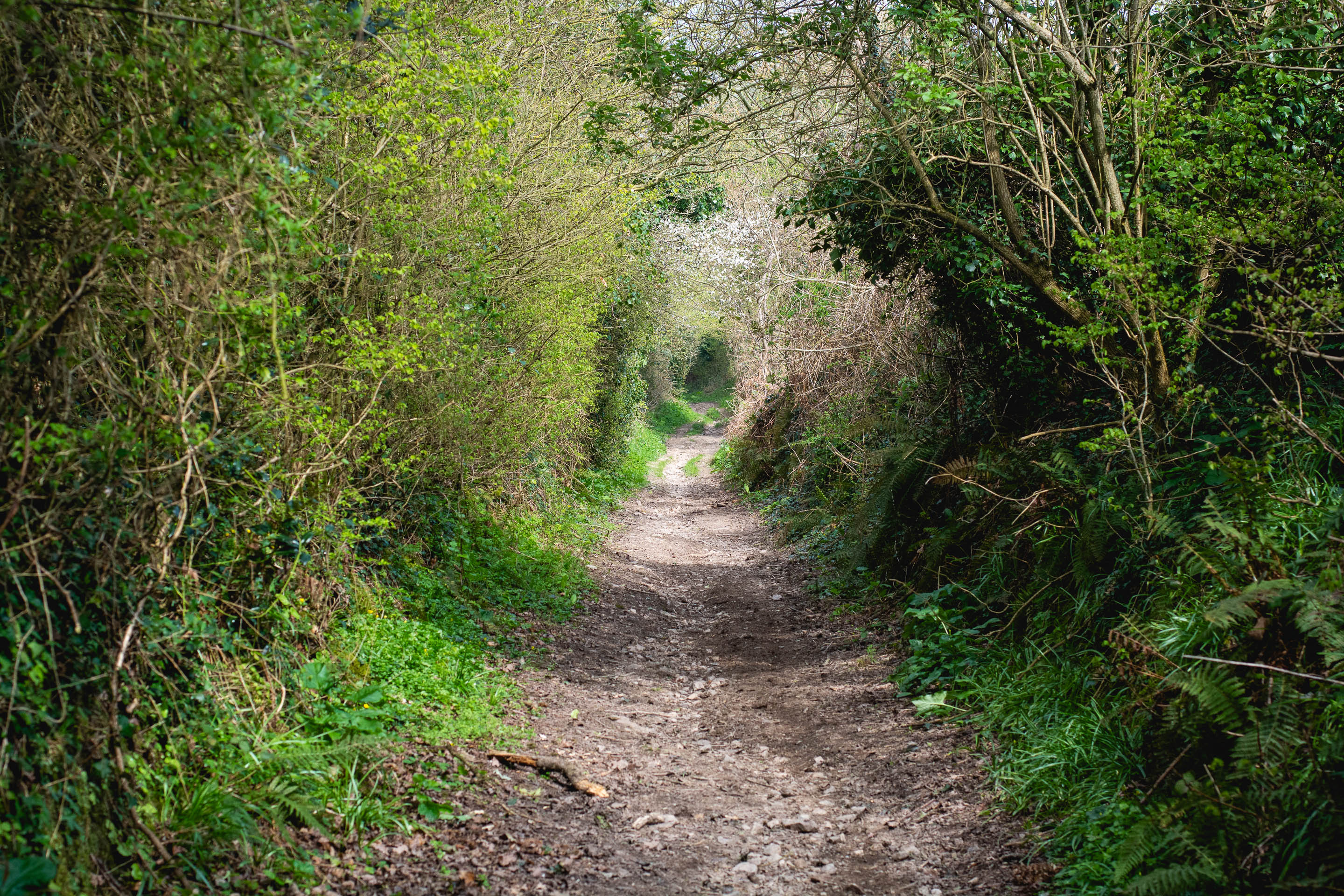 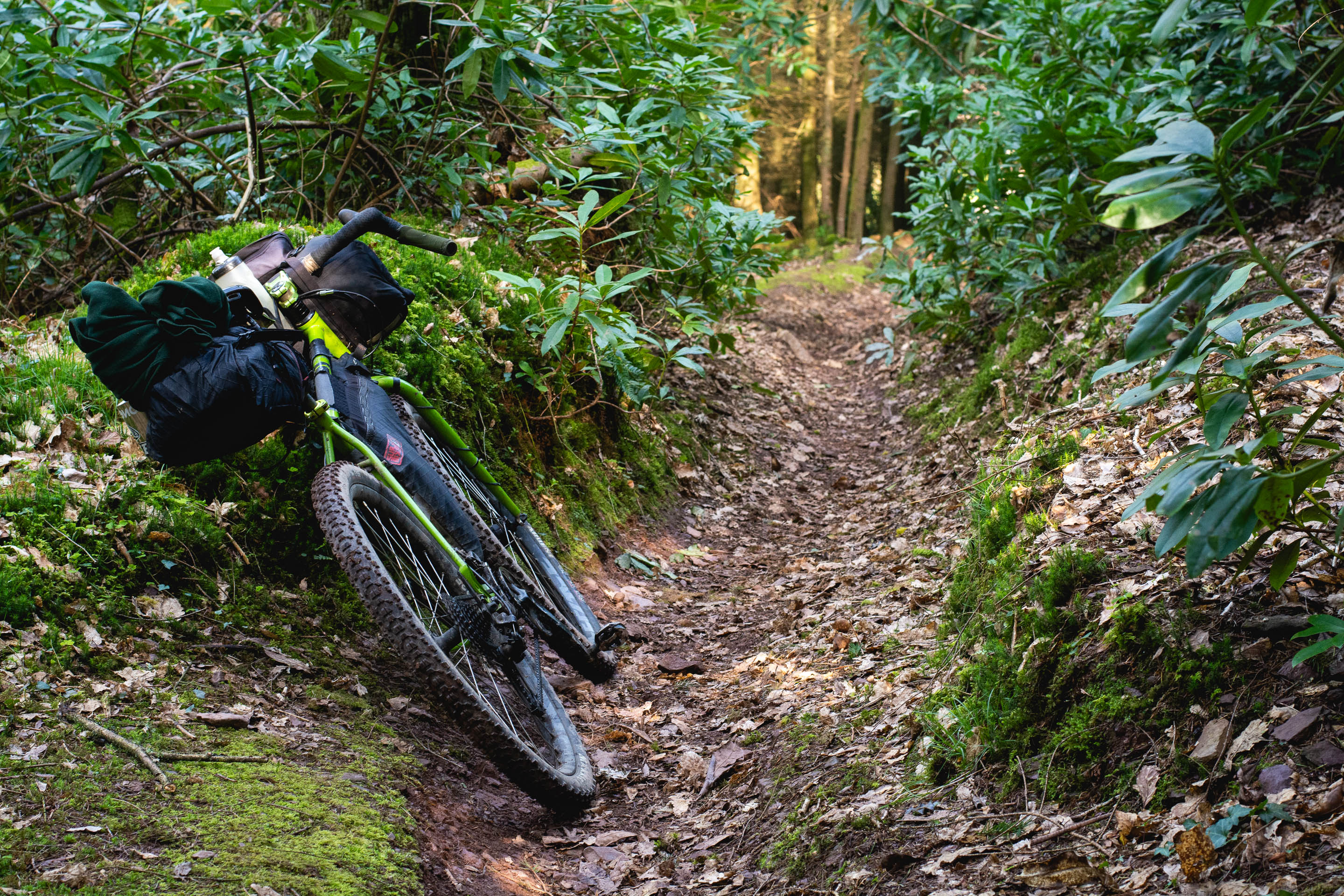 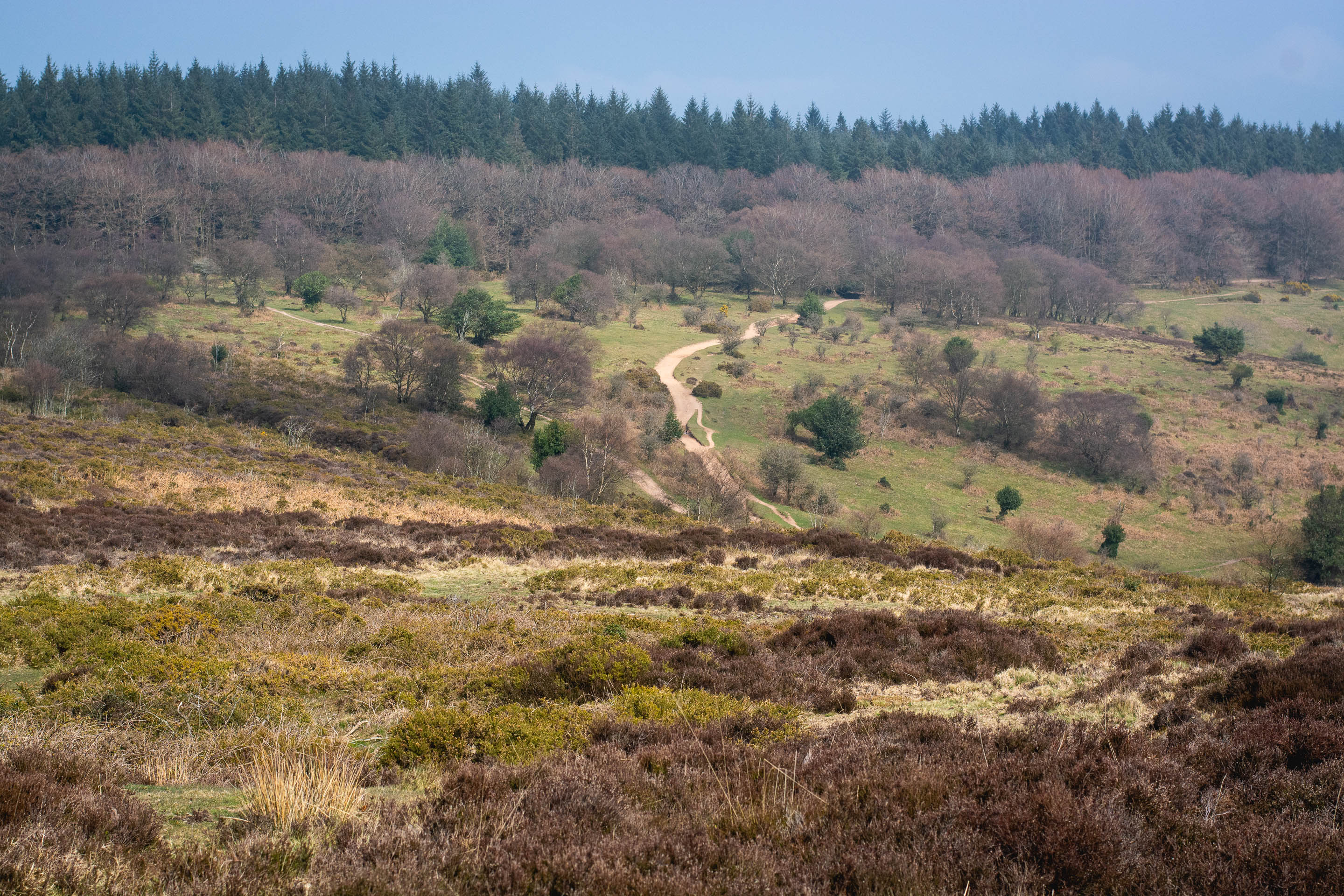 I continued north along the Quantocks ridge line as the sun dropped, illuminating the moorlands in a bright red glow. The landscape reminded me of the Montana section of the Great Divide Mountain Bike Route and the rutted out roads reminded me of the ATV tracks in New Mexico. It was getting late in the day so I dropped down into the valley and made my way towards Exmoor. 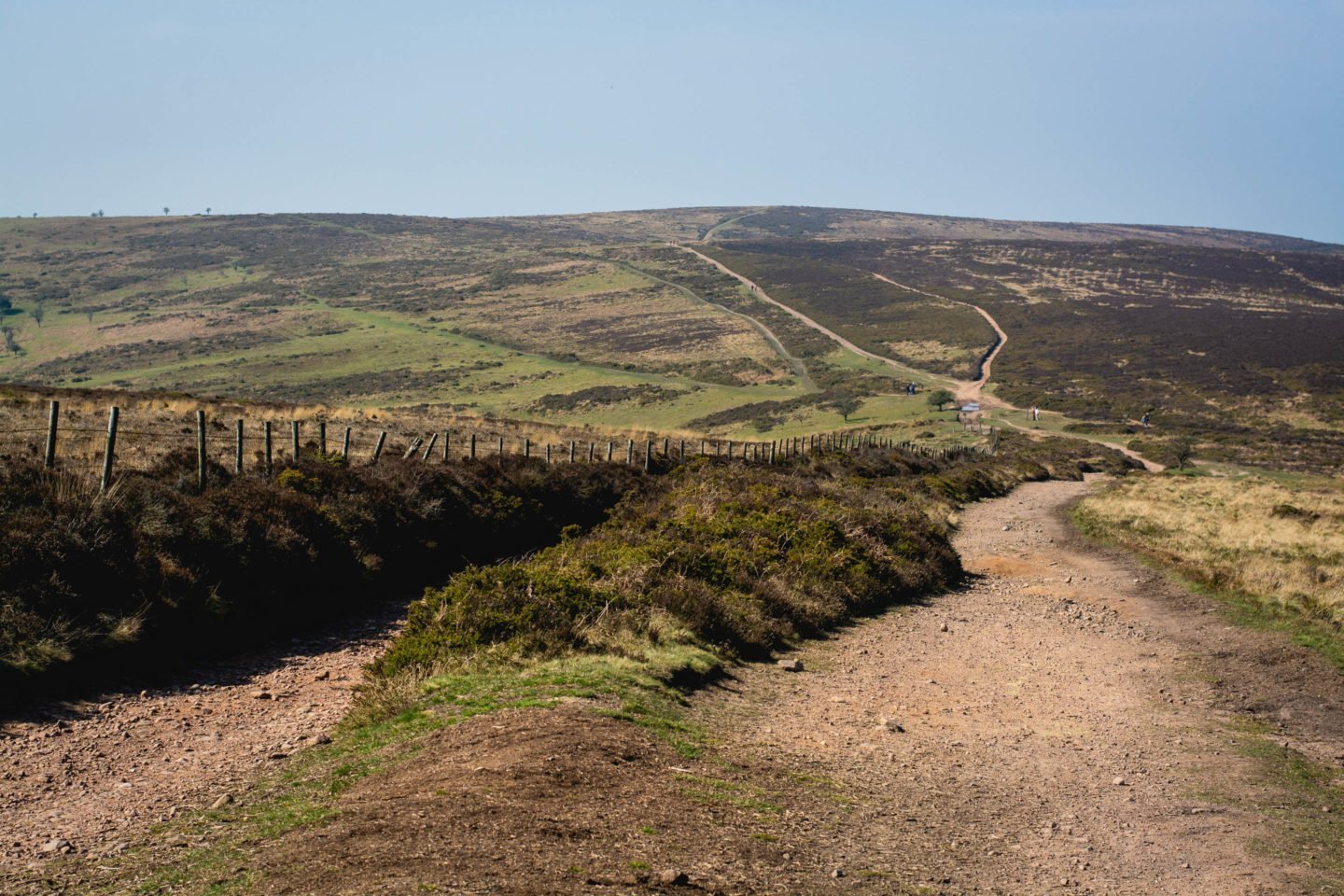 I was hoping to camp at Dunkery Beacon which is the highest point in Somerset, positioned in the upper middle region of Exmoor. Before ascending to the beacon, I got a little distracted by Dunster, England’s largest and most intact Medieval village. Its charming streets and ancient castle on the hill drew me in for a rather lengthy wander. The cracks in the villages stone walls were bursting with Wildflowers. The 16th century “Yarn Market” building at the end of the high street was reflective of the once bustling wool trade that England’s southwest seems to be known for. 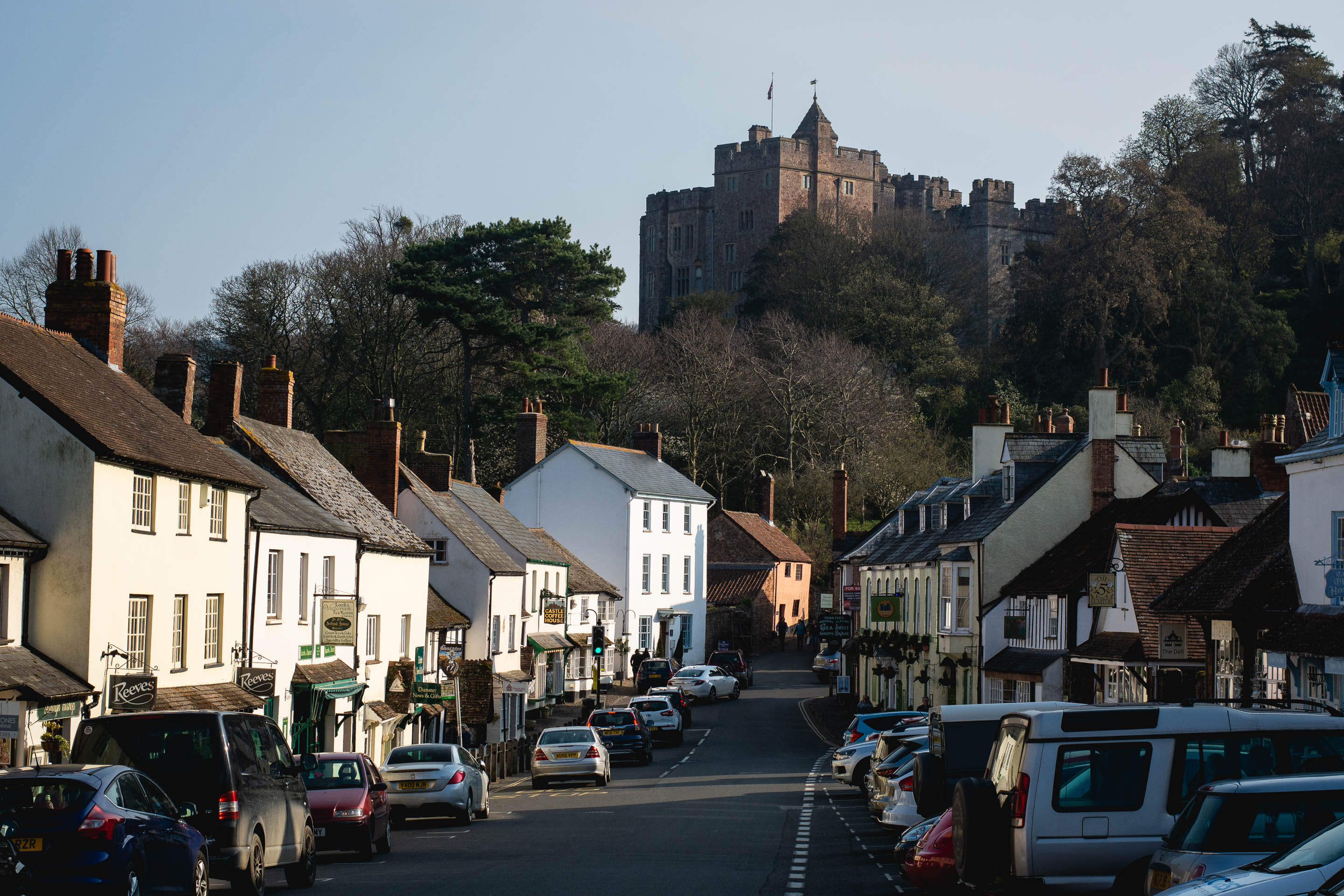 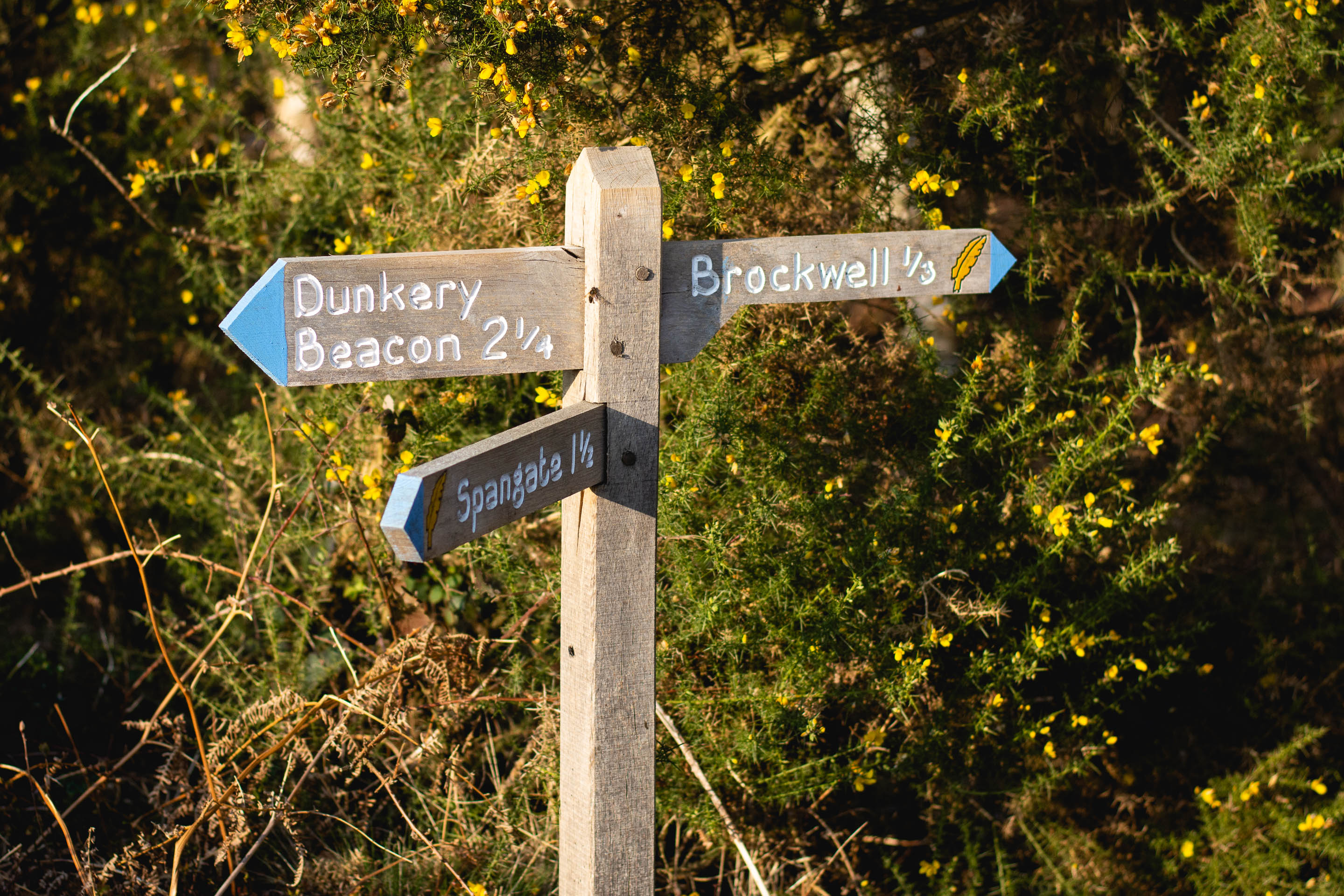 The long, rugged climb to Dunkery Beacon started not long after peeling myself away from the adorable village. The last few kilometres leading up to the beacon was a hike-a-bike but the sun was really low so the views were unreal. I arrived to the top just in time to make some coffee as the sun set. It was so peaceful up there. For dinner I chopped up a head of broccoli into a pot of instant pasta. The temperature was dropping; making hot food key. 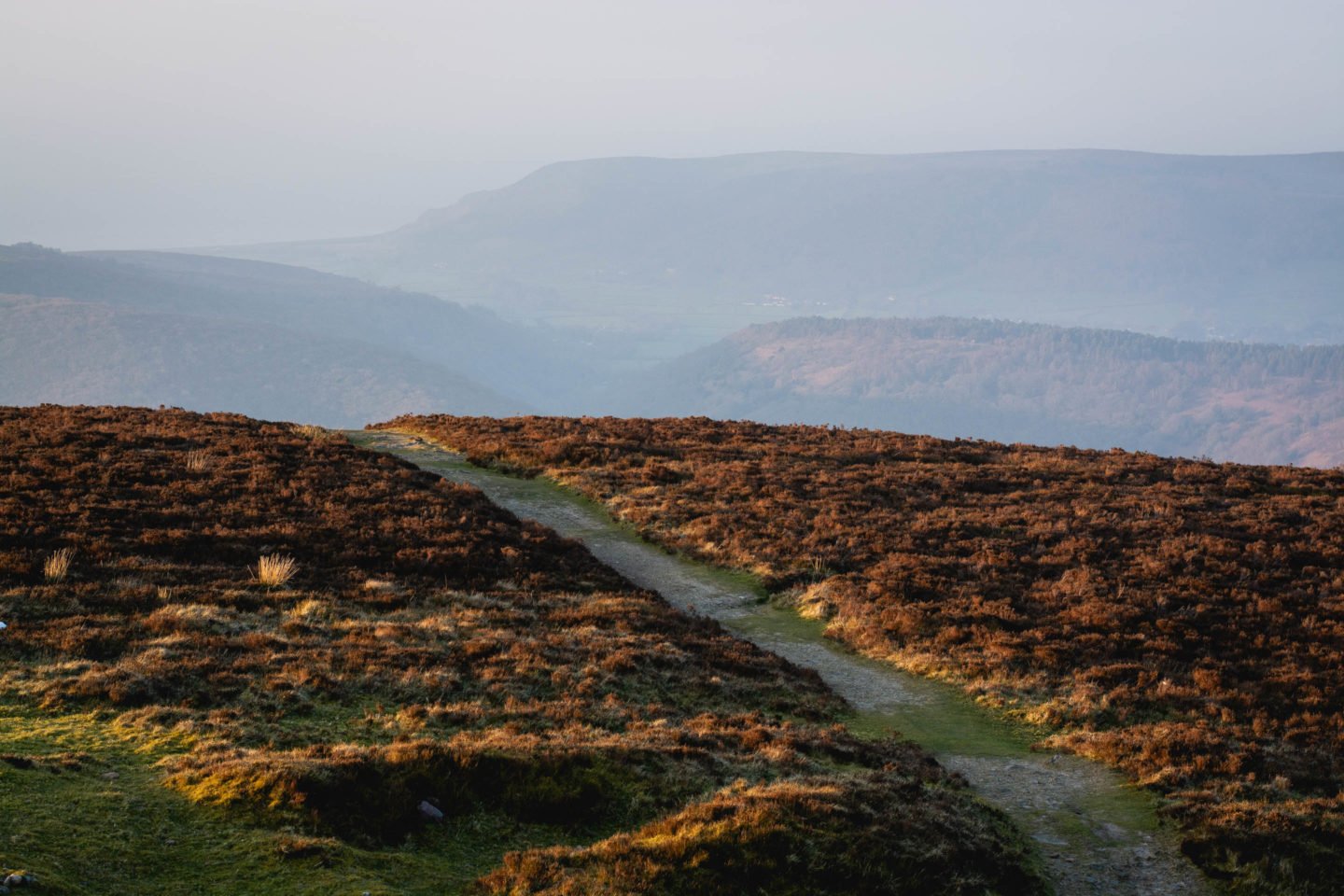 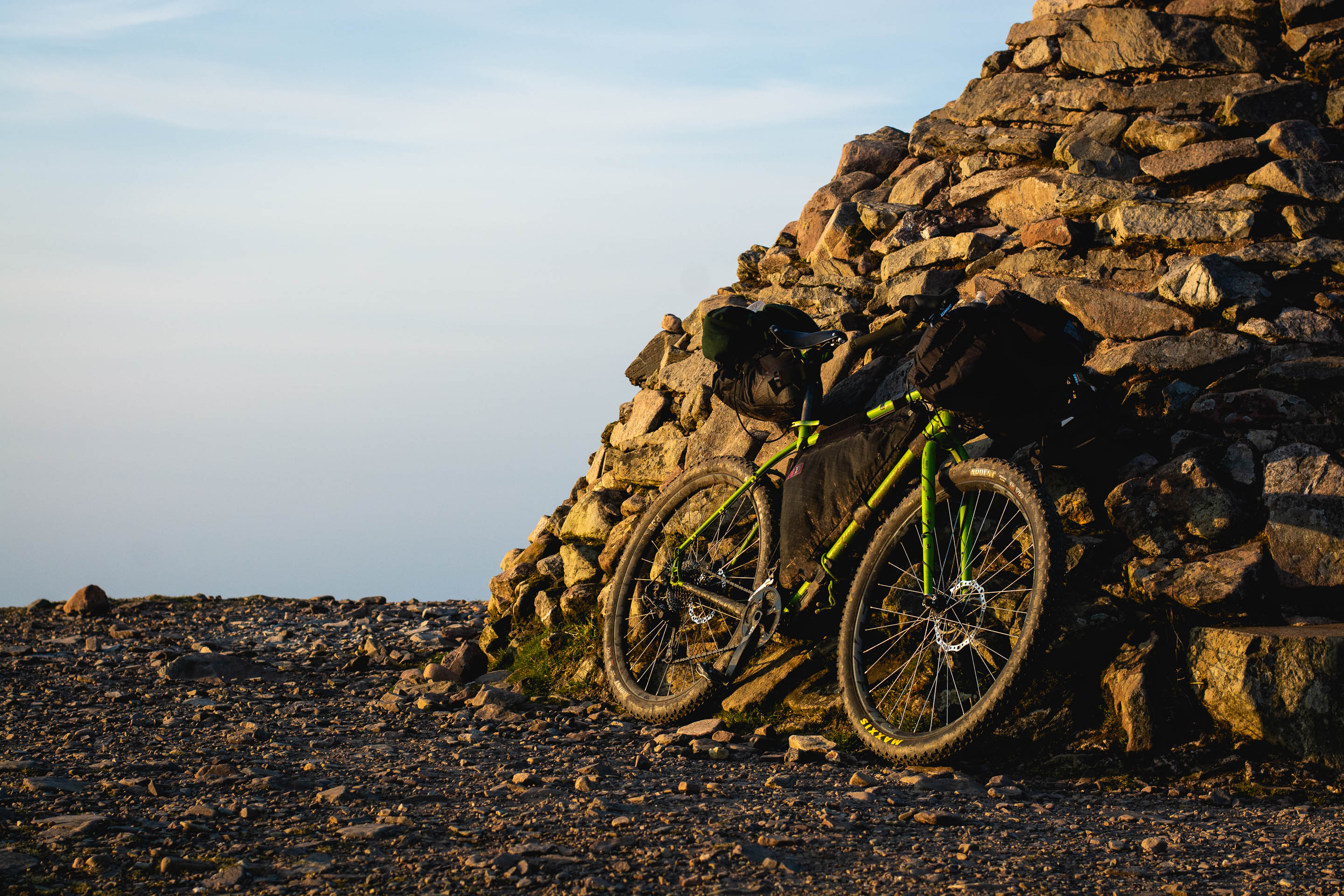 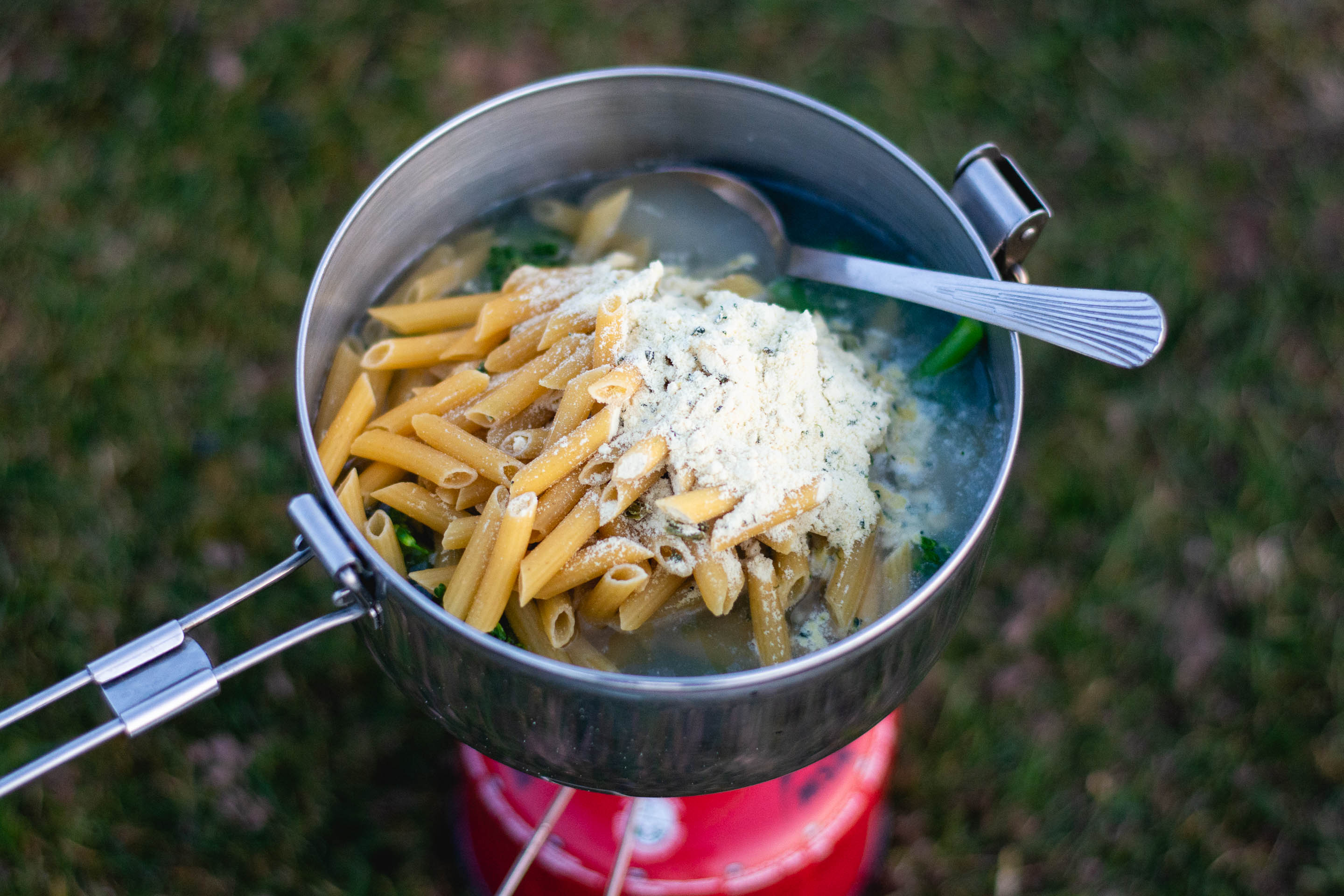 I set up my tent at dusk and then laid down under the starry night sky. With little to no light pollution, Dunkery Beacon is an incredible place to take in the night sky. I was surprised yet pleased to see a group of mountain bikers arriving at the beacon close to midnight. They were just out for a nice little night rip.

After hitting the sack the weather shifted from calm and clear to wet and windy. Fog was bombarding my tent all night and a large puddle formed at my feet. At the first sign of daylight I got some water boiling and made coffee and oatmeal from the comfort of my sleeping bag and tent. 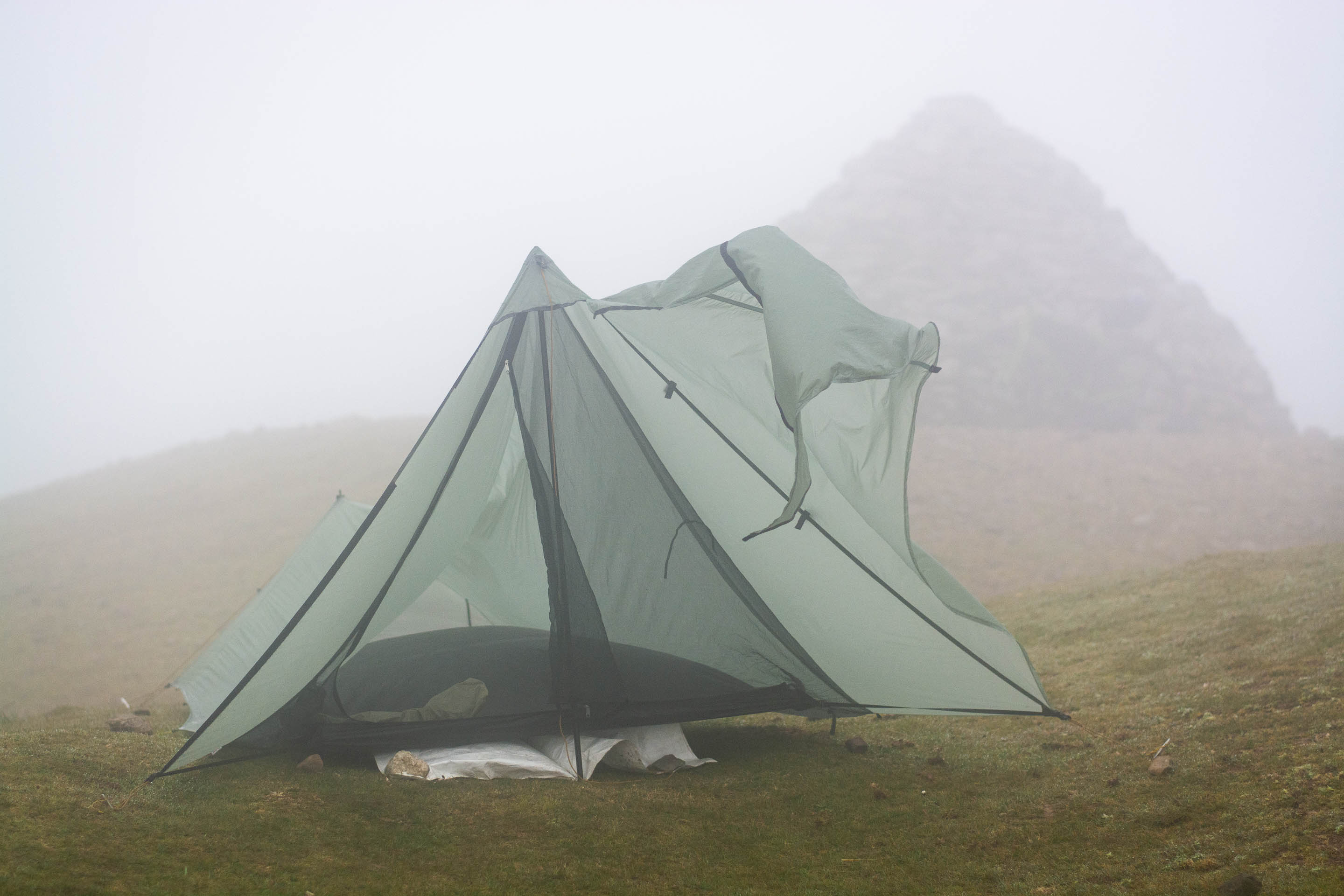 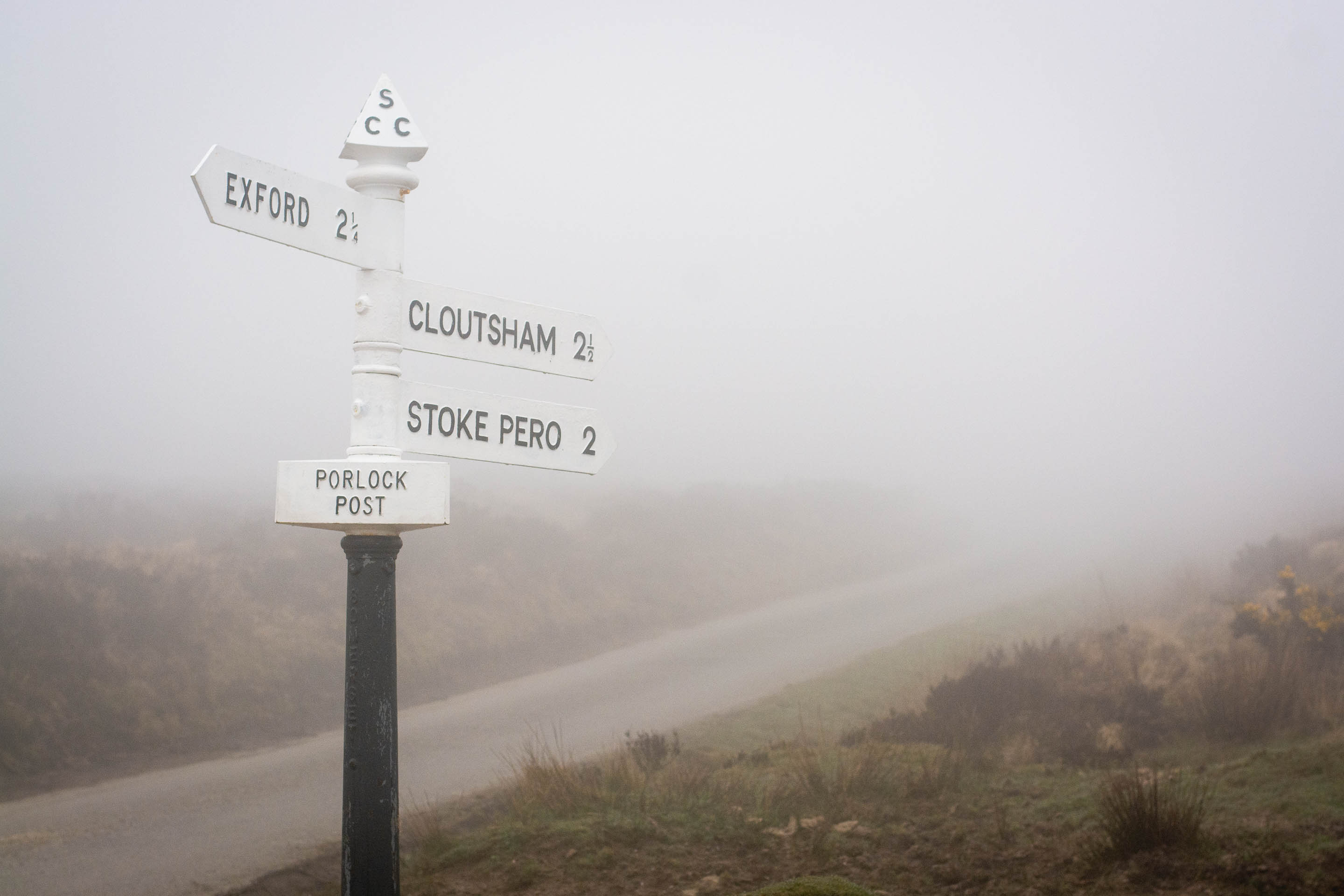 It was quite cold and I knew my best bet at staying warm would be to pack up quick and pedal away. I was basically riding through a cloud all morning but it was very peaceful as the fog sucked up any sounds and all I could hear was the crunching gravel and singing birds.

The long descent between Dunkery Beacon and Porlock Weir consisted of thrilling steep single track and off camber footpaths. I could ride that section over and over. Porlock Weir is a charming seaside settlement with a few shops and cafes but when I was there it was a ghost town. However there were lots of friendly doggies roaming about which was nice. I had a quick cappuccino and toastie before heading for the highly anticipated SW Coast Path towards Lynmouth. 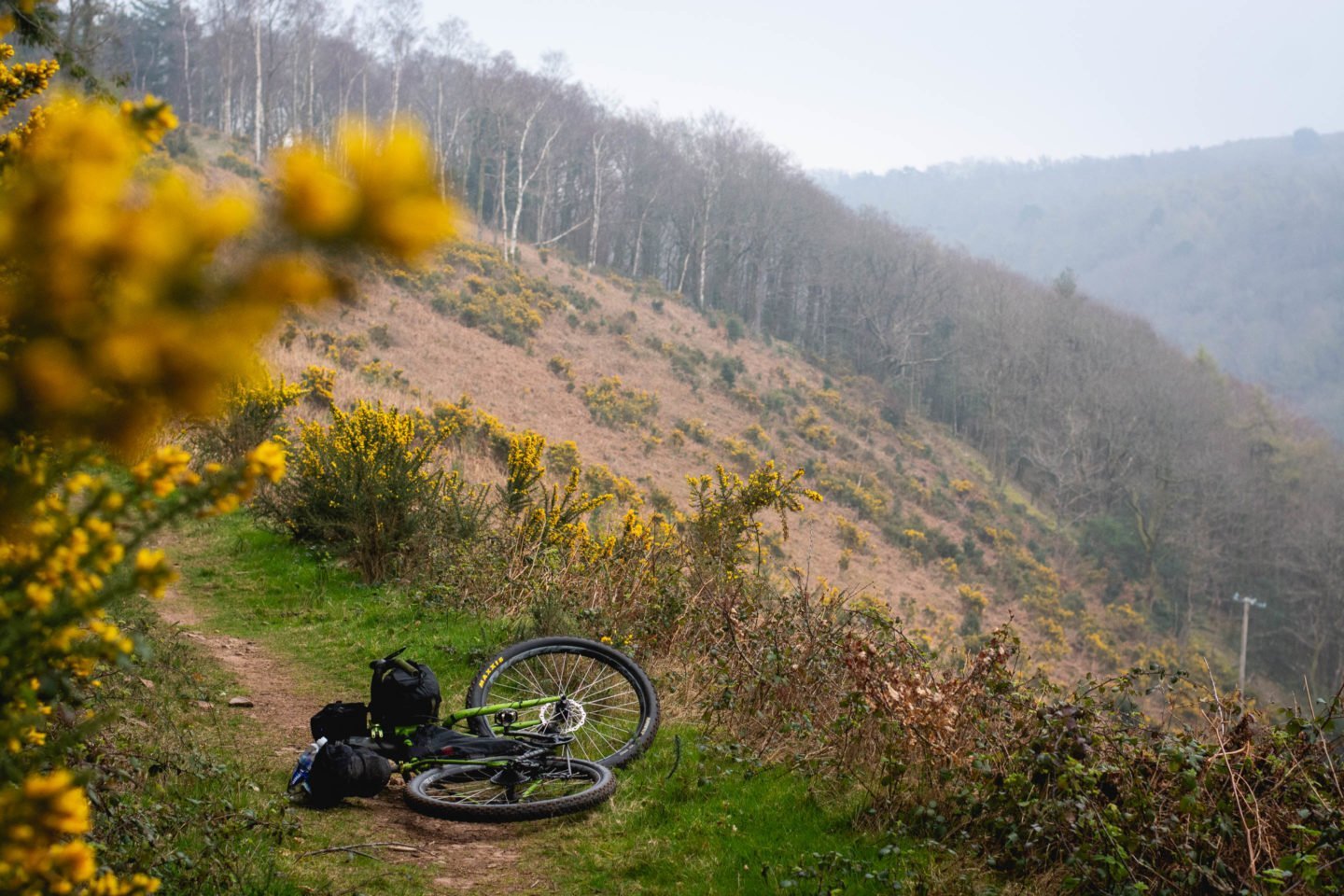 The coastal path was being worked on so the beginning of the trail was a long hike-a-bike detour. The trail was a lush tunnel formed from ancient stone walls, overgrown shrubs and decently large trees. There were also countless vistas over the Atlantic sea. I was stoked to see so many thru-hikers along the way. All the hiker groups were super friendly and baffled to see a bike out there. It wasn’t that bad. 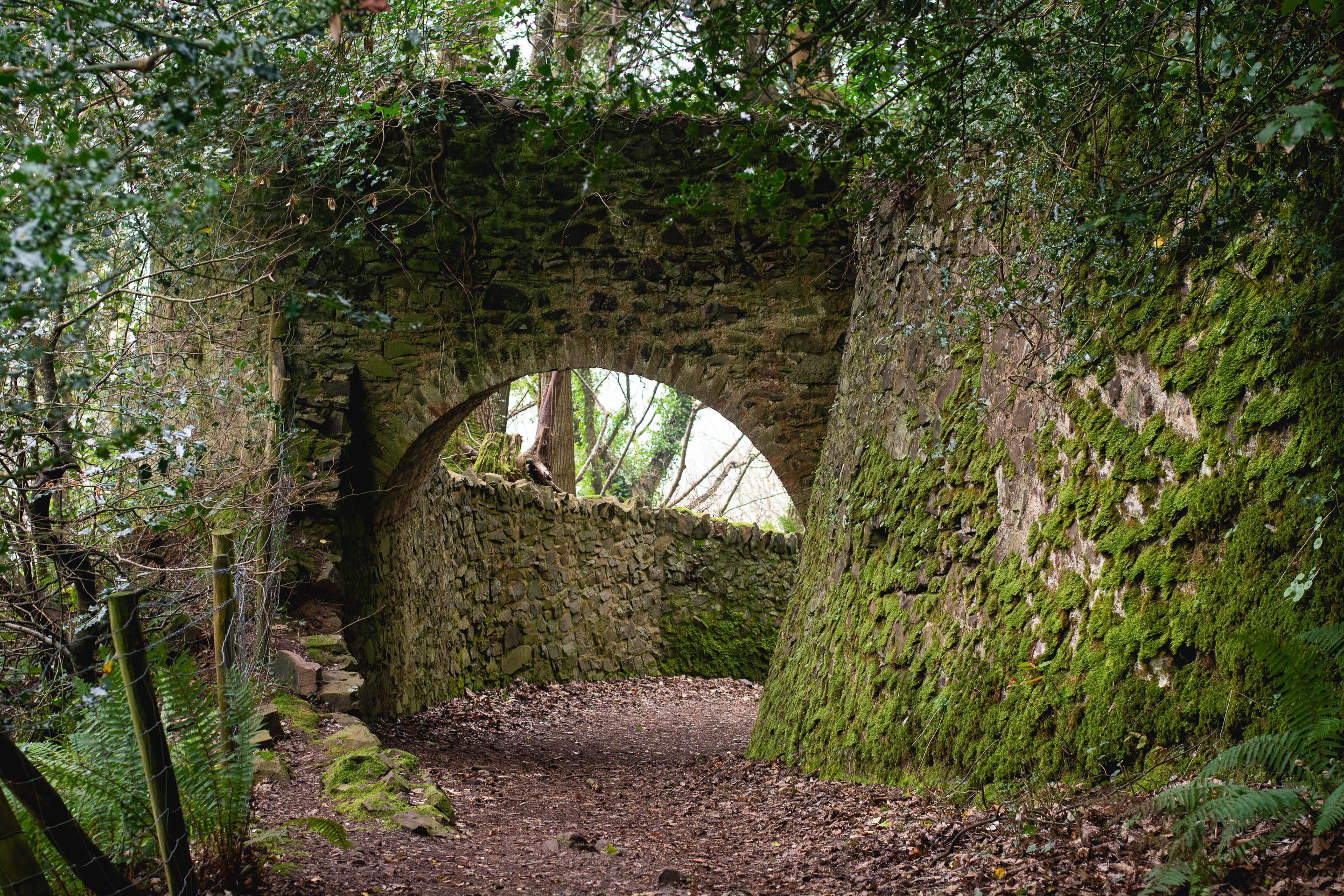 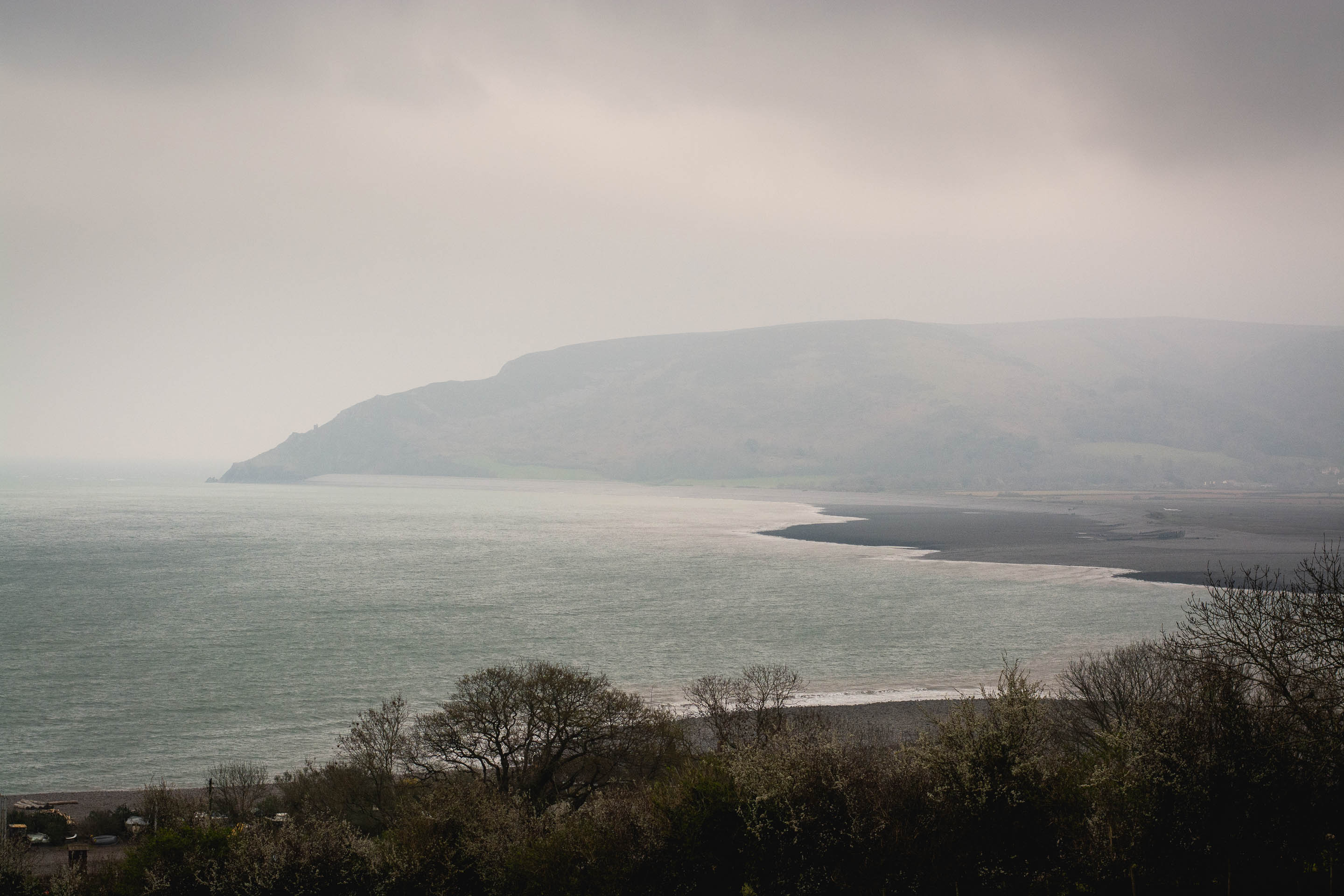 I soon passed through the very small hamlet (settlement) of Culbone which was nothing more than a small church, a couple houses and “Culbone Stone”, a medieval rock dating back to the 7th century. It was tucked into a tight, forested valley with a creek running through it. 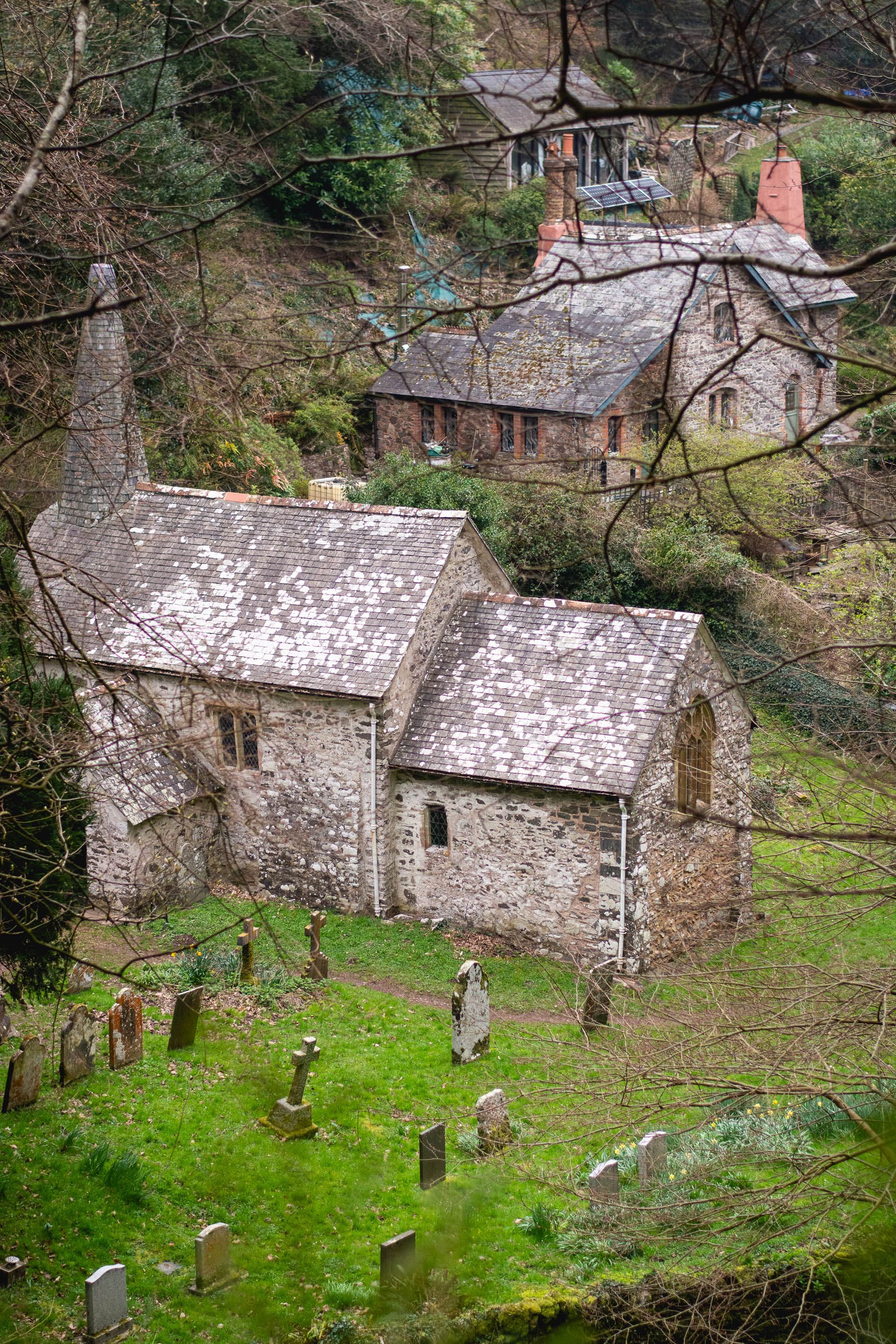 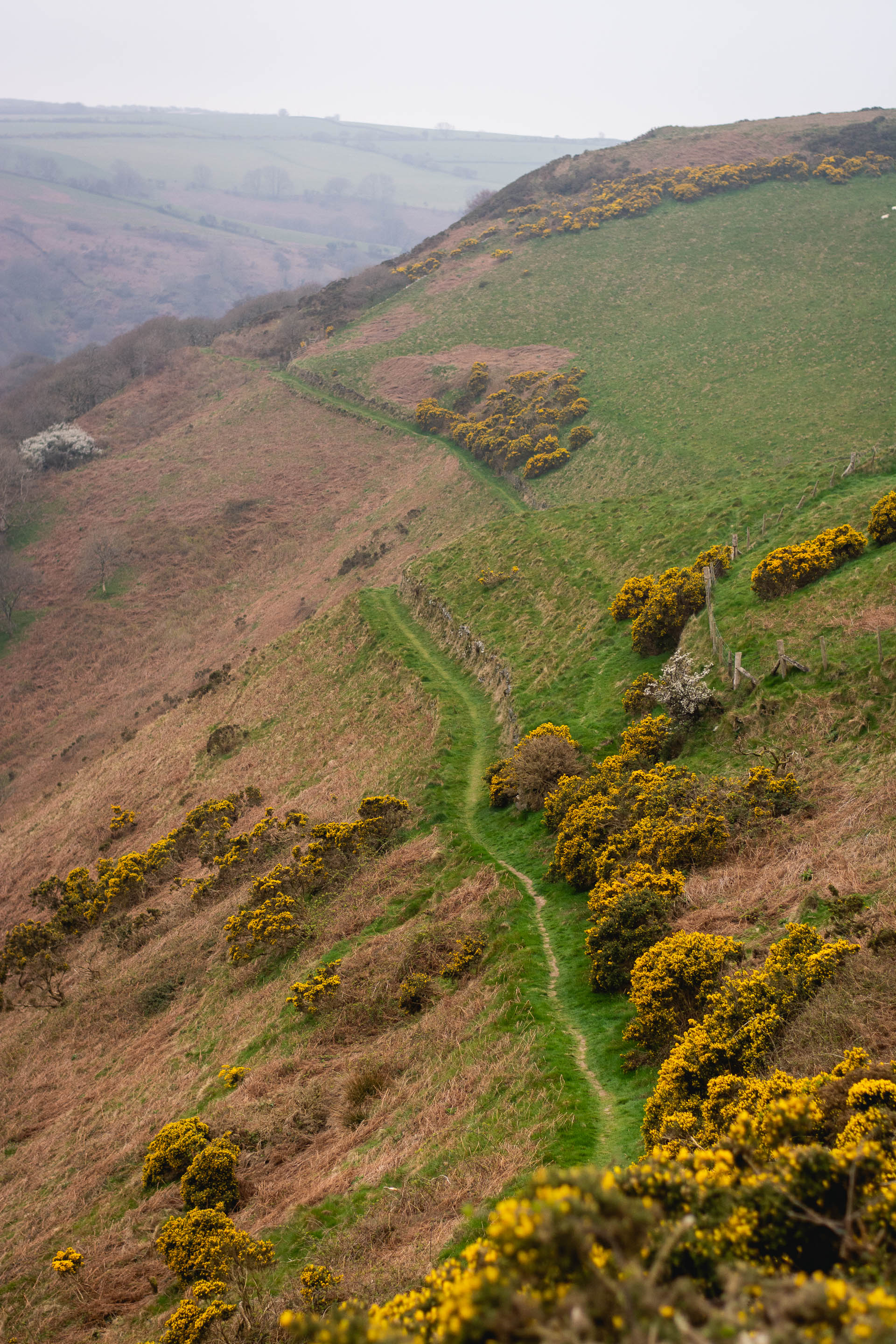 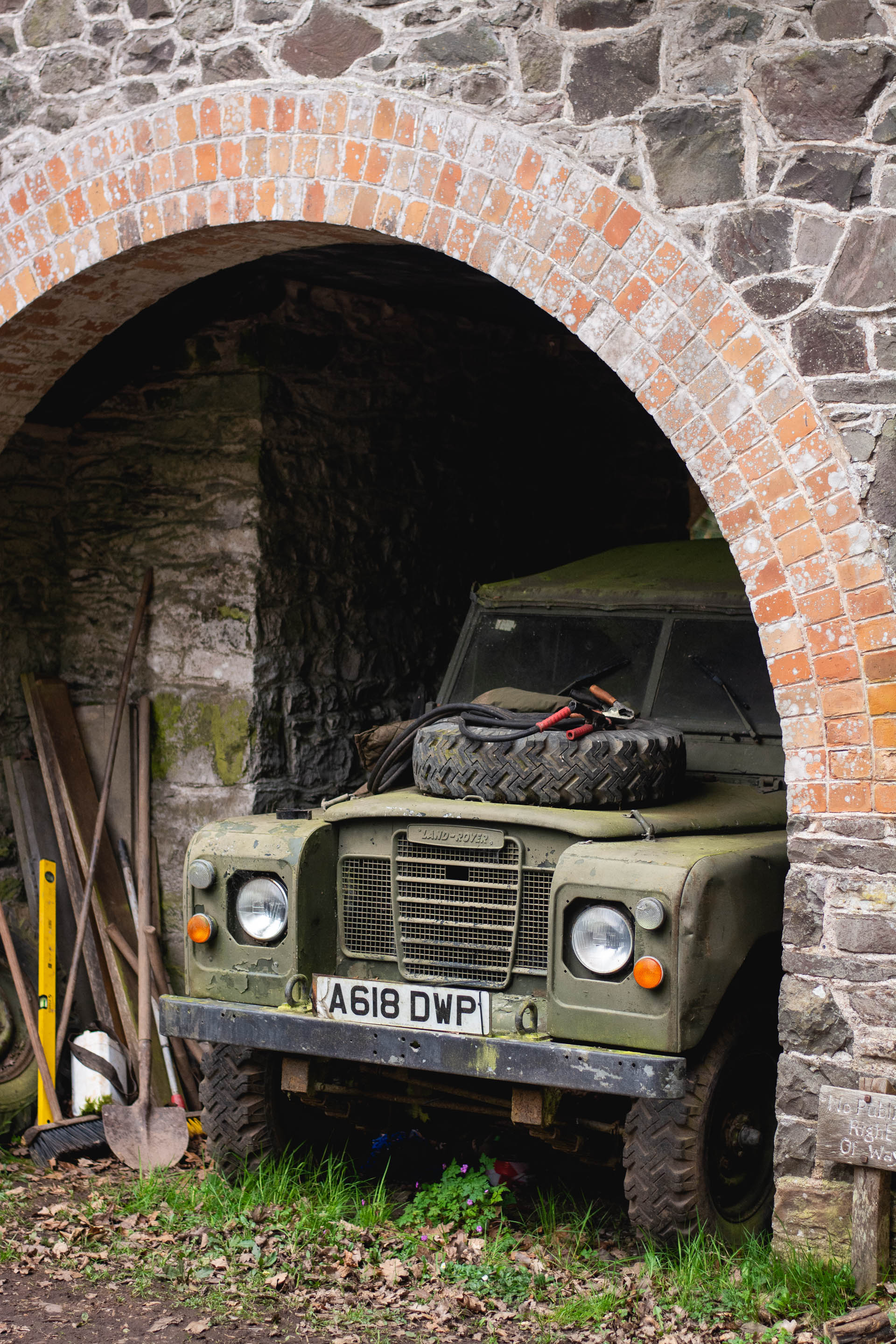 The SW Coast path was amazing but I was hoping to make it to Lynmouth before heading all the way back to Taunton so I hopped onto the A39 road to speed things up. The hill up to the road from the SW Path was absolutely gruelling. The coastal views, riding conditions and hellishly steep hills reminded me of touring the Lost Coast in northern California. 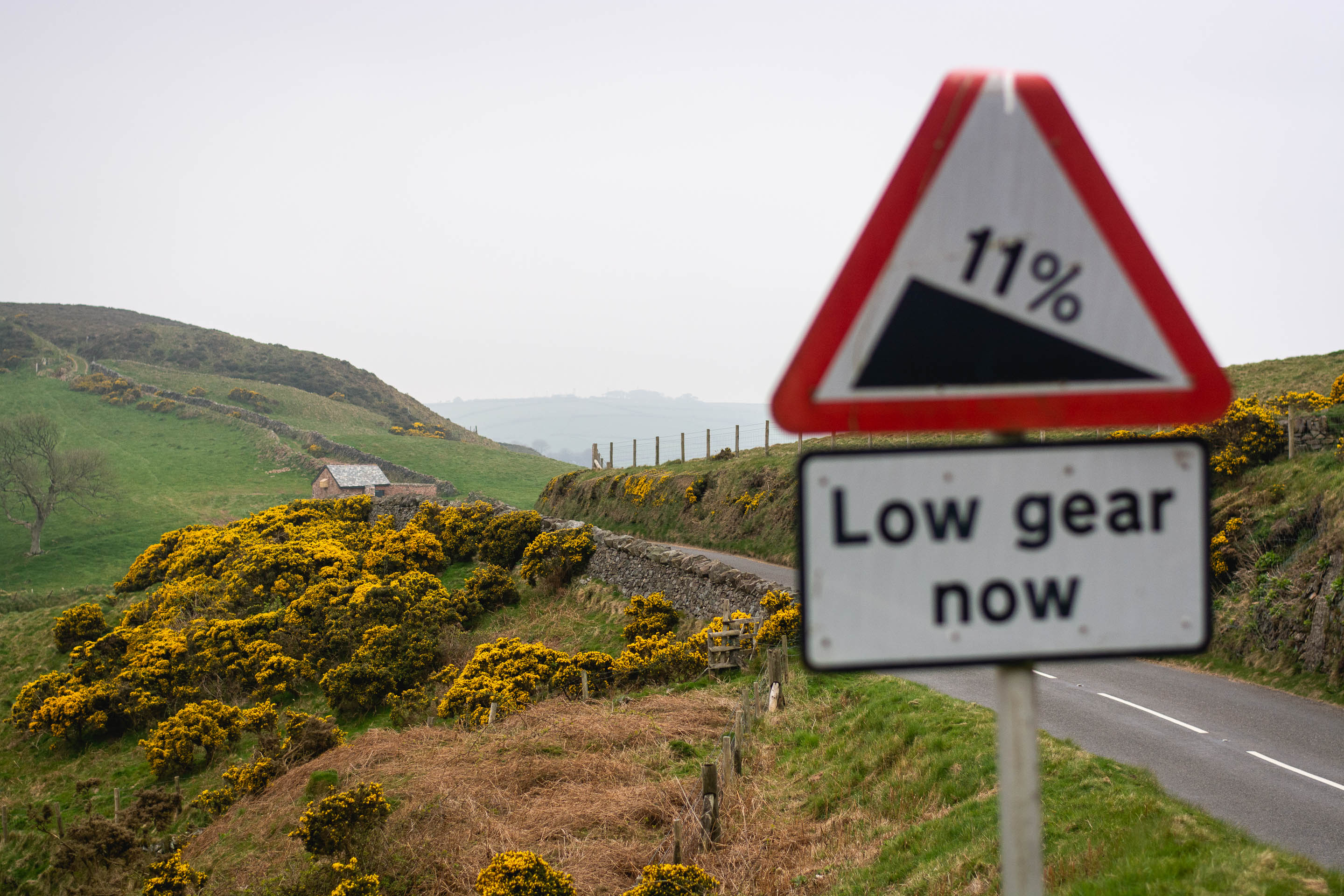 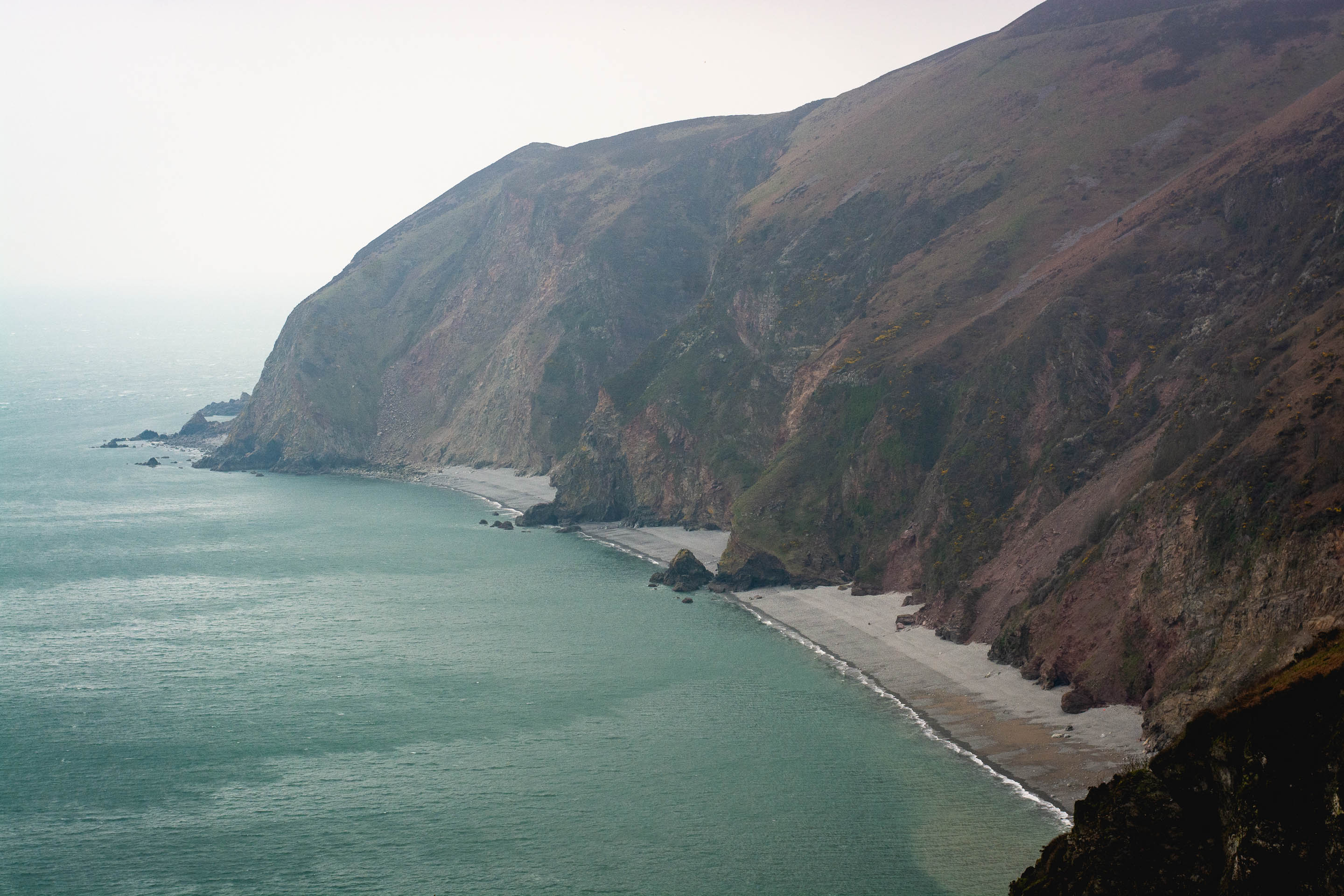 Despite being a main road, A39 was rather scenic, with views of the coast, cute river valleys and loads of frolicking sheep. The road suddenly dropped down the side of the high bluff into Lynmouth where I was greeted by the comforting smell of Cornish pasties and salty shores. The geography of Lynmouth is really unique as it straddles the East Lyn River and West Lyn River in a gorge 700 feet below Lynton. The world’s tallest and steepest water powered railway connects Lynmouth to Lynton which was the only place to expand after Lynmouth was completely built up. 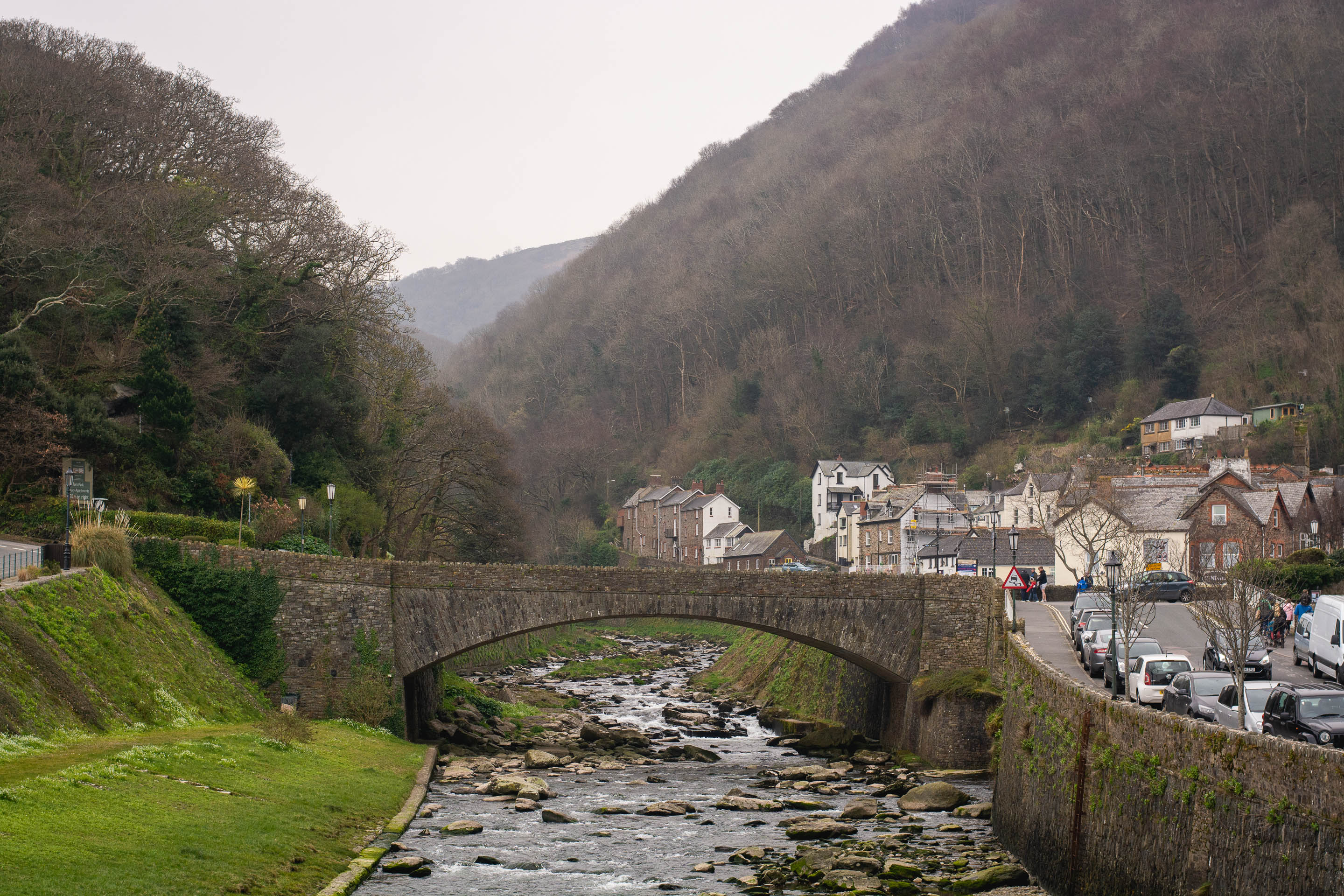 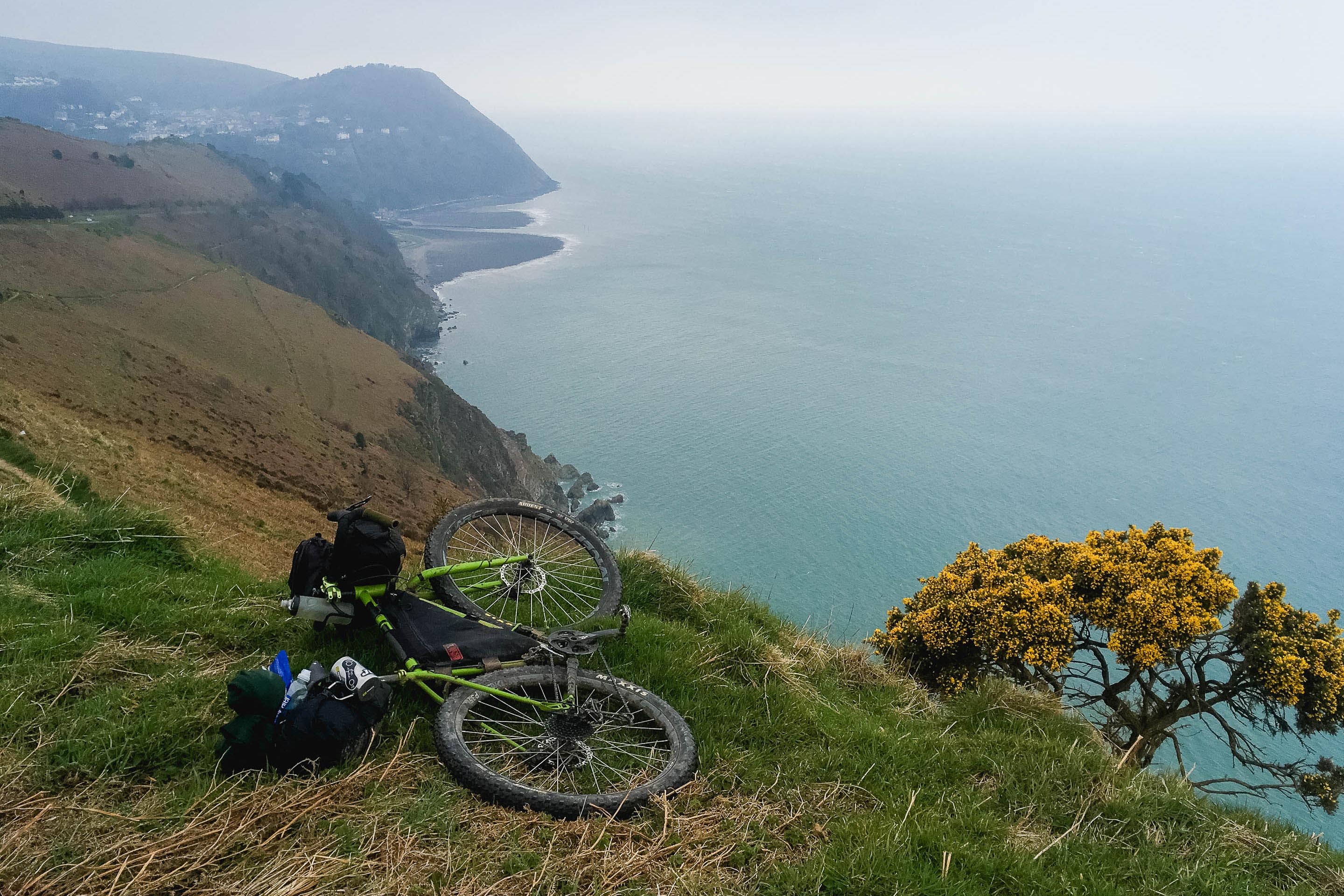 I scarfed down a pasty and a cuppa joe and made my way out of town. I followed the road through the East Lyn River gorge which was potentially the most scenic part of the trip. The gorge was extremely luscious and the river cascaded down countless small waterfalls. The road was narrow and windy, nestled between the steep edge of the gorge and an ancient looking stone wall. Moss was growing out of everything. There were lots of dreamy looking footpaths and picnicking spots along the river which I’m eager to revisit and explore. 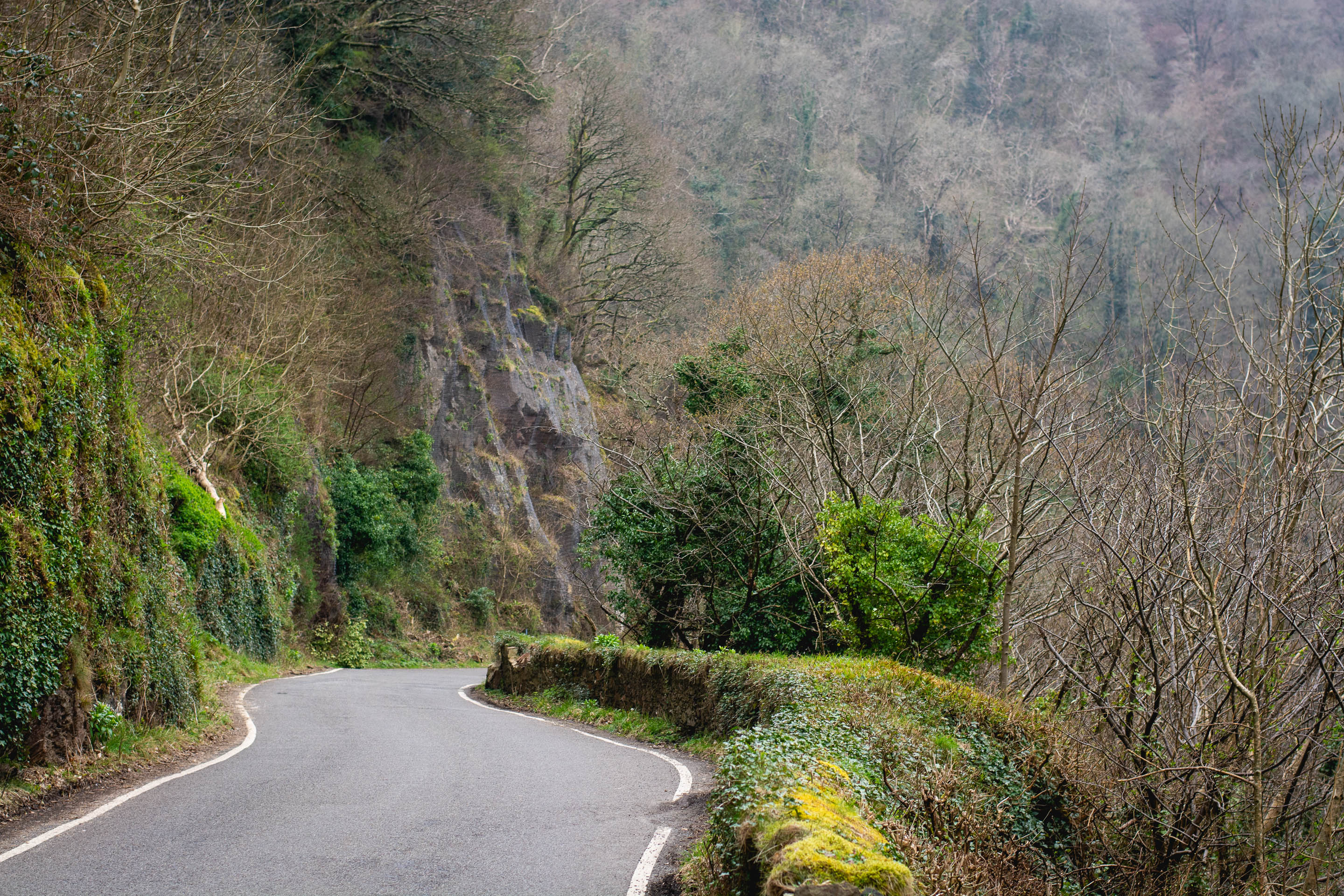 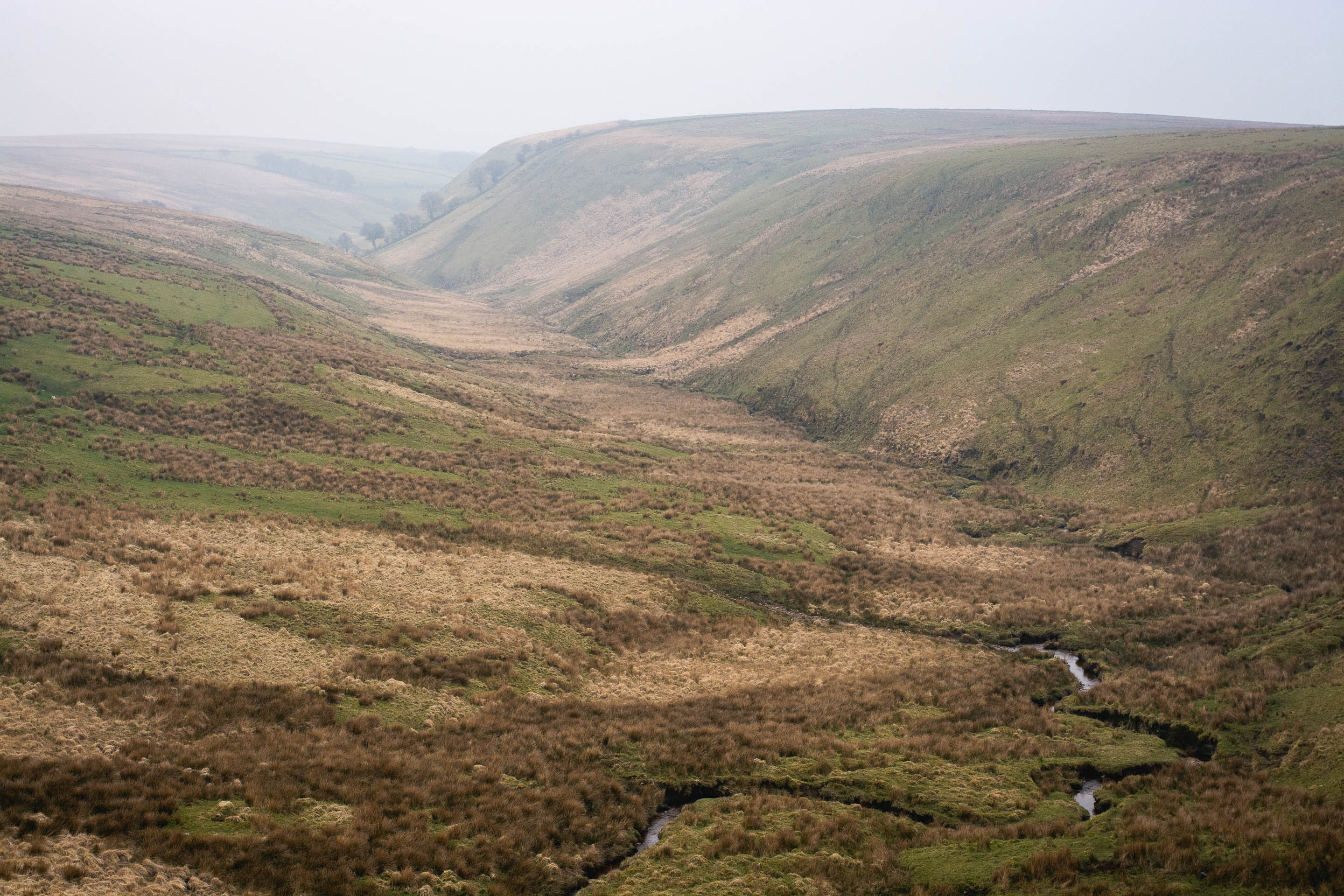 After a lengthy climb out of the gorge the landscape opened up into vast moorlands, reminiscent of British Columbia’s Okanagan region. It was late in the afternoon and I still had about 65 kilometres to go before arriving in Taunton so I decided to take a direct route, which turned out to be pretty boring. I did pass through some nice little villages including Simonsbath, Exford and Wheddon Cross but after that it wasn’t too exciting.

I arrived in Taunton shortly before sunset and hopped on the train to Bath. I’m always very impressed with the train staff’s willingness to let me bring my filthy bike onboard. That UK mud is just impossible to avoid.