With hot, sunny weather and a mostly car-free route, we couldn’t have asked for a more beautiful bike camping adventure to Golden Ears Provincial Park. It is one of the largest parks in the province and is so pristine it’s hard to believe that it’s only 60km from Downtown Vancouver. The park features plenty of hiking and cycling trails, regular campgrounds and wilderness campgrounds, Gold Creek and Alouette Lake, a perfect spot for swimming and sipping beers on sandy beaches.

We took off from our home near the Vancouver General Hospital and followed the 10th Ave bike route until it connected to the Central Valley Greenway, a paved and gravel cycling/walking path that is mostly separated from from vehicle roadways. After entering Burnaby and arriving at the Sperling/Burnaby Lake SkyTrain Station we headed north on the Lakes Bikeway which connected us to the Barnet Highway. Heading west on the Barnet Highway is a beautiful downhill section that cuts between Burnaby Mountain and the Burrard Inlet which eventually funnelled us into the City of Port Moody. As we rode through Port Moody we stumbled upon Originals Cafe Mexicano, a cute Mexican cafe where we enjoyed espresso and a Mexican soda. The food looked great but unfortunately we hadn’t been riding long enough to build up an appetite. After Port Moody we followed the Trans Canada Trail and the Traboulay Poco Trail which cuts through beautiful forests and along Pitt River for about 10 kilometers. These packed gravel trails were fairly smooth even on relatively thin road tires. Before crossing the Pitt River Bridge we grabbed groceries from Save On Foods (2385 Ottawa St, Port Coquitlam), the last large grocery store on route to the park. After crossing the bridge we were surrounded by farmland which would soon have blueberries plants and food stands lining the road. After riding along a long, flat stretch of road we connected to the Vernon Trail, a beautiful gravel cycling/walking trail with a view of the mountains on one side and horses grazing along the other. The trail was short but rather rough because the gravel was coarse and loose. We stopped at Maple Ridge Park to fill up our water for the final stretch entering the park. After a steep climb up Fern Cresent we arrived at the park entrance only to discover there were 13 more kilometres of riding before reaching Alouette lake and the three main campgrounds. Fern Crescent which leads up to park entrance is windy and has a narrow shoulder so take caution especially if the roads are busy. We We arrived in the evening and only saw cars coming the other direction which was perfect. The road through the park was gorgeous and peaceful, lined with Western Hemlock, Western Red Cedar and Douglas Fir trees. The bugs were pretty bad but the scenery distracted us.

At the time of our trip the only campground open was Gold Creek Campground so we decided to spend our first night there. Unfortunately it was $35/night however there were decent facilities including potable water, flush toilets and free showers! On our first night we made a scrumptious pita sandwich filled with sausages, tomatoes, zucchini and onion. We were fairly tired from our day of riding so decided to take it easy, sip wine and star gaze through the trees before hitting the hay. In the morning we had coffee (we always make sure to find little tetra packs of almond milk which don’t go bad since we can’t keep anything cold), packed up and rode a few kilometers to North Beach where Gold Creek empties out into Alouette lake. We spent a few hours relaxing on the sandy beach, swimming in the lake and then made egg and veggie burritos for lunch. We perused the surrounding area and found a secluded spot on the edge of Alouette lake where we thought we would camp for our second night. After stashing our camping gear there we rode our bikes back towards Gold Creek Campground to explore some hiking trails. We hiked the West Canyon Trail for an hour and a half until we reached a beautiful view of the Lower Falls. Unfortunately there was no bridge to the other side of the river so we had to turn around and hike the same trail back. After our hike we made our way back to our unofficial campsite and prepared a dinner of soba noodles and beans as the sun went down. We set up camp after dark because we were a little worried a park ranger would kick us out. No one came to bother us so the rest of the night was quite peaceful sleep at the edge of the lake. On our second morning we packed up early and enjoyed our coffee as we watched the sun rise over the lake. We didn’t pack much food for the second breakfast so we just snacked on energy gummies as we biked out of the park. We didn’t find a breakfast spot until we came across a great butcher/grocery/bakery right before the Pitt River bridge. After filling up on some nice greasy food we had a rather uneventful trip back home. We opted to brave the traffic and take a faster route along the highway and then connected to some trails along the north side of the Fraser River. Eventually we connected to the Central Valley Greenway which led us home. Although the route wasn’t long or particularly hilly, being the first trip of the season our legs were tired and we crashed as soon as we got home. 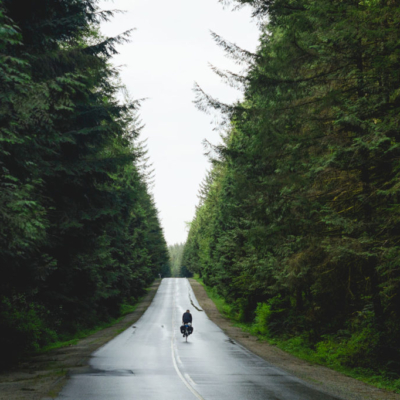 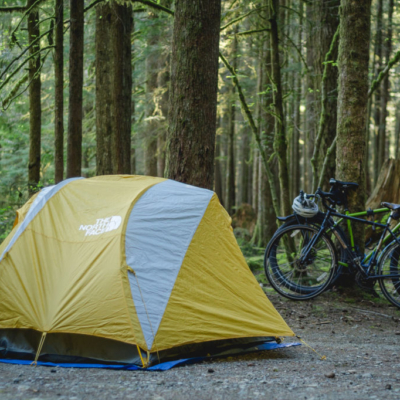 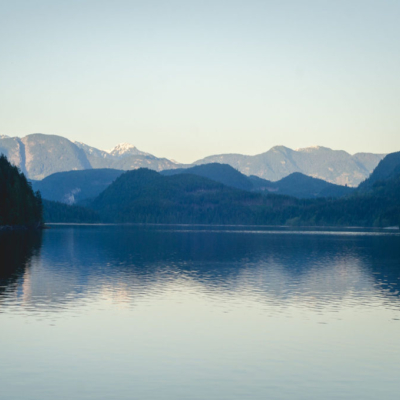 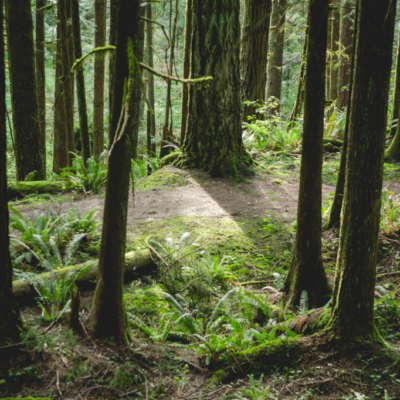 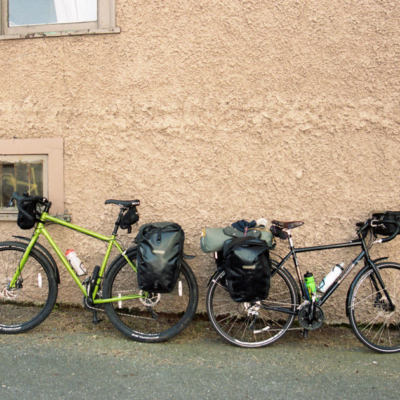 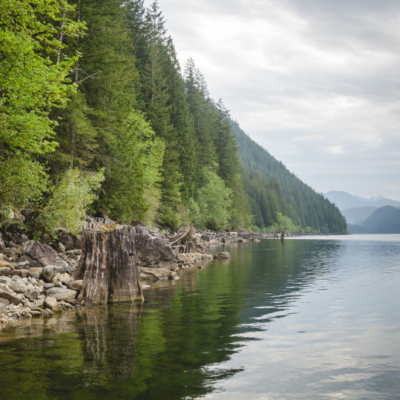 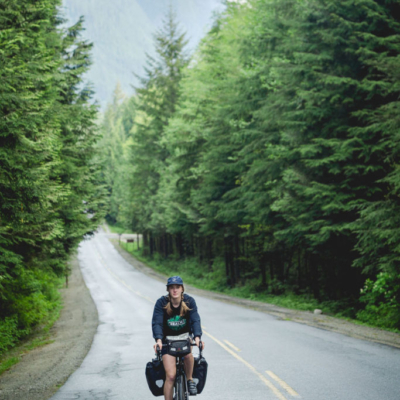 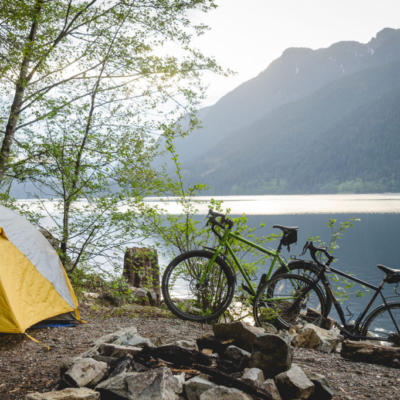 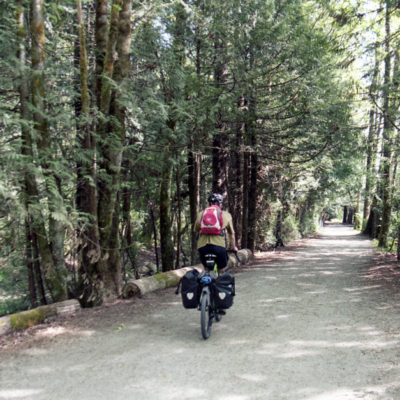 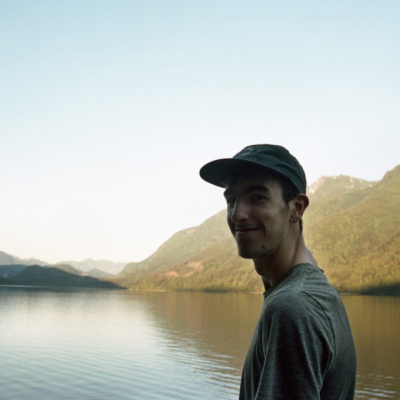 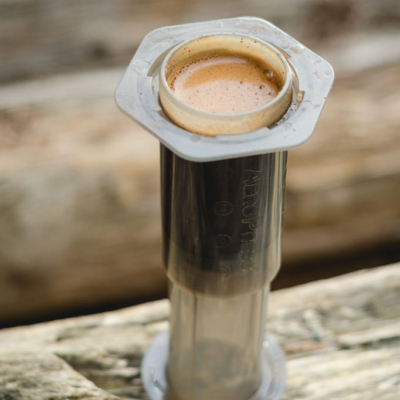 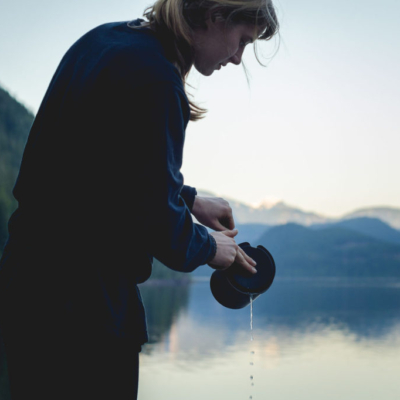 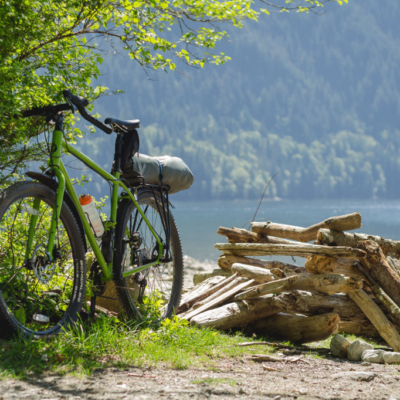 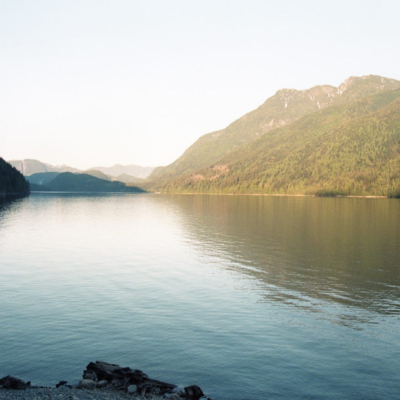 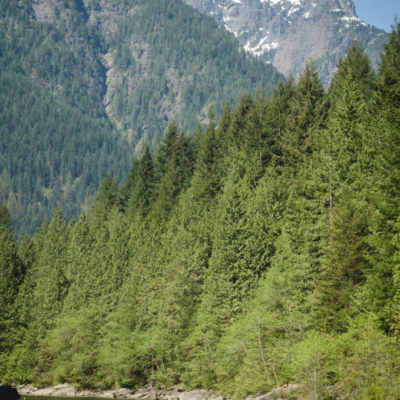